“To laugh often and much; To win the respect of intelligent people and the affection of children; To earn the appreciation of honest critics and endure the betrayal of false friends; To appreciate beauty, to find the best in others; To leave the world a bit better, whether by a healthy child, a garden patch, or a redeemed social condition; To know even one life has breathed easier because you have lived. This is to have succeeded”.  Quote by, Ralph Waldo Emerson

How much I appreciate these wise words of Emerson’s! He writes of moral successes that paradoxically, put the bar both quite high and quite low. A ‘redeemed social condition’ might take more effort than helping just one person, but they are still successes.

It is very good to be reminded of these important reasons for being alive, especially today, in the competitive modern world, when success is often aimed for, seen and experienced as material success at all costs: the honours degree, the next job up the ladder, the successful business… These may be ‘real world’ objectives or ‘pressures’ but how do they fit the larger objectives referred to by Emerson? Are successes in the material world materially different from the kinds of success that he describes?
They might be, but I do not think they are necessarily so.

I feel that when material success is not kept in a separate compartment of thought from the kinds of success that Emerson puts forward it is ultimately more satisfying. Your own personal values determine what success is for you. What you aim for yourself, what you consider as success in others and what you experience as success are individual matters.

Let’s start with the experience of success. Success is very similar to contentment in that it is about satisfaction with how things are. Contentment can be a steady state in life if we are living in a mature way. Success can also be a regular feature of a rewarding life, but the feeling of success can also just be a fleeting experience. This fleeting experience of success may occur if when one goal is successfully reached, it is immediately followed by whatever effort is necessary for reaching the next one, and the next one after that…
Have you ever been hill walking and toiled uphill, perhaps in rain and wind with a pack on your back, to reach the top of the ridge, only to see the next ridge, and perhaps the one after that, still ahead of you before you reach your destination? Then you have to find some strength from inside yourself to keep going. It does help to stop for a while, to look back at how far you have come and to admire the view. We have to remember to do a bit of ‘breathing easier’ ourselves as well as helping others to achieve ease.

Finding strength within is good. It is necessary for achieving any kind of success, as long as you do not exhaust yourself and do not miss out on celebrating each success on the way towards further successes.

I think that is what is so helpful in what Emerson expressed. Both the ‘redeemed social condition’, which is a massive success, and the ‘one life has breathed easier’, which is a relatively modest success are notable successes.

Perhaps in terms of experience, perhaps that can be compared to the Olympic gold medalist reaching the podium for their medal and the child about to be presented with the school prize for winning a race. Both can be completely satisfying 10/10 experiences of success.

I heard on BBC Radio 4 recently that in animal experiments, I think it was rats as usual, the creatures who had succeeded in one challenge, in this experiment winning a fight, were more likely to win the next one, even though there was no measureable difference in prowess between loosing and winning rats. The same seems to be true of boxers. It is not just how good a fighter the boxer is, but whether or not he or she has already won that creates a winning psychology.

You could, and people often do, take that the wrong way round. I hope you don’t.  Expecting failure because of previous failure is a vicious circle and it is one well worth escaping.
You do not have to wait for large successes to be acknowledged by others (like the Olympic champion) before you allow yourself to have experiences of success. You can build what I like to call a ‘history of success’ by taking note of all your successes, whatever size or type. Try writing down seven successes every day for a week and notice how you feel. According to the psychologists, that kind of behaviour makes the next win easier to attain.

That is where contentment comes in. Appreciating small successes, including little increments of the kinds of success that Emerson refers to, can create ease with how things are, and hence contentment in life. There might be plenty of work to do to reach the large goals, but it is one step at a time and the steps can be celebrated. That process of celebration builds the mindset and the muscle for successfully reaching your big goals.

It’s akin to the cup described by Kahlil Gibran, if we do not keep it full, the cup itself dries out and turns to dust. 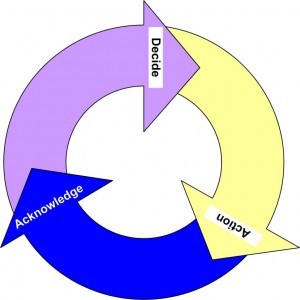 This is what Professor Angus McLeod calls ‘acknowledgement of success’ and he produced a figure for this, where one decides to act, one takes action and is successful and then one acknowledges that success BEFORE moving to the next task.What better way to keep the cup topped up and STAY successful!!?

Figure is from ‘Self-Coaching Leadership – from Manager to Leader’ by McLeod, A., Publ. John Wiley, 2007.